Although much of pre-Christian mythology in pagan Ireland did not survive the conversion to Christianity, manuscripts written in medieval times attempted to preserve this important history.  Books such as the 12th century Lebor na hUidre (Book of the Dun Cow) and the Book of Leinster helped scholars identify several cycles of Irish history; the Mythological Cycle, the Ulster Cycle, the Fenian Cycle and the Historical Cycle.

The Mythological Cycle, also known as the ‘Golden Age’ of Irish mythology, is one of the least preserved of the cycles, but I see as one of the most interesting.  The Book of Invasions, Lebor Gabála Érenn, written in the 11th century, tells the story of the ‘taking of Ireland’ with a combination of history, mythology, folklore, and Christian-inspired flair.  It tells of the six successful cycles of invasions in Ireland starting with the Irish creation myth.  The first three invaders were the Cessair, Partholón, and Nemed people.  A group of exiled Nemesians from Greece, called the Fir Bolg, were next to invade.

After only a short time, a group of exiled Nemesians from the North came to Ireland and challenged the authority of the Fir Bolg.  These fair-haired people were known as the Tuatha Dé Danann, or “children of the Goddess Danu”.  They were known to have great magical knowledge and a priestly class of people called Druids.  They carried with them four magical treasures; the Sword of Nuada, the Spear of Lugh, the Cauldron of Dagda, and the Stone of Fal (Lia Fáil), or the Stone of Destiny.

The Book of Invasions ends with the Milesians, or Sons of Míl Espáine, the first Gaelic speakers and probably the earliest “Celtic” people.  They are thought to have brought iron to Ireland, representing the beginning of the Iron Age.  During their invasion, the wives of the Irish High Kings, and matron Goddesses of Ireland, Banba, Fodla and Ériu, asked that the new land be named in their honour.  The name Éire remains a poetic name for Ireland today.  The Tuatha Dé Danann were exiled underground, where they represent the sidhe, or faery folk, of Ireland.

The next literary cycle, the Ulster Cycle, takes place around the time of Christ in the Ulster and Connacht regions of Ireland.  This is also called the ‘Heroic Age’, as many tales are devoted to the heroic actions of Conchobar mac Nessa and the great hero Cú Chulainn, the son of Lugh.  The main story of the Ulster Cycle is the epic Táin Bó Cúailnge, The Cattle Raid of Cooley or The Táin.  The Táin tells of the story of Queen Medb (Maeve) and King Ailill of Connacht attempting to steal the prized bull Donn Cuailnge, with the Ulster hero Cú Chulainn saving the day. 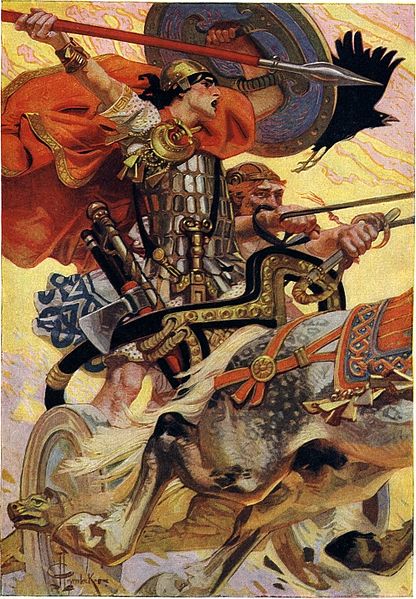 The Fenian Cycle takes place around the 3rd century CE in the Leinster and Munster regions of Ireland.  Mainly from the manuscript Acallam na Senórach (Colloquy of the Old Men), the Fenian Cycle contains stories about the famous Fionn mac Cumhaill (Finn MacCool) and his enemy Goll mac Morna.  Two famous stories from the Fenian Cycle include Oisín in Tír na nÓg and Tóraigheacht Dhiarmada agus Ghráinne (The Pursuit of Diarmuid and Gráinne, most likely the source of the story of Tristan and Iseult).

The Historical Cycle, or the Cycles of the Kings, records the history of High Kings of Ireland, from the mythical Labraid Loingsech around 431 BC, to the historically accurate High King Brian Boru in the 11th century. 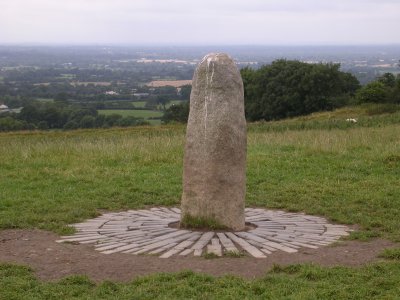 The Hill of Tara, Cnoc na Teamhrach, was noted in the Book of Invasions as the seat of the High Kings of Ireland.  Although it is uncertain whether the hill held the same significance throughout the ages, archaeological evidence prove that the area had been used since Neolithic times.  The Hill of Tara is also the site of the Lia Fáil, the Stone of Destiny, one of the treasures of the Tuatha Dé Danann.

Although the legendary capital of the Tuatha Dé Danann and seat of high-kingship over the ages is not used as a seat of power today, the Irish still seek to preserve this important site.