The Spiral is known as a symbol of the goddess, a symbol of life.  A Spiral represents “death and rebirth as movement into the disappearing-point of formlessness, and out of it again, to a new world of form.” (The Woman’s Encyclopedia of Myths and Secrets) 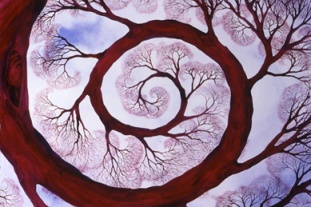 Also known as Triskele, the Triple Spiral is seen at many ancient Irish Megalithic and Neolithic sites, such as at the Newgrange monument.  Triskelions can also be seen in the flags of Sicily and the Isle of Man.

The Celts believed that all things moved in eternal cycles, and the triple spiral reminds us of the cycle of life.

One response to “Spiral”